Tracey Walter is a veteran character actor who you have not only seen, but probably recognized once or twice, given his decades of consistent work and recognizable appearance. He’s a little guy, with a kind of funny voice, and an unkempt appearance that’s become more haggard as he’s aged. He’s played a lot of people on the fringes of polite society; a sampling of his characters’ names from IMDB includes the following: “Hedgehog,” “Janitor with Information (uncredited),” “Toupee salesman,” “The Vagrant,” “Pappy,” and “Panhandler.”

This sounds sad, but it’s really not. Walter has cultivated this look for himself, and subsequently cornered the thoughtful bum role, the same way Danny Trejo solidified himself as Hollywood’s go-to Hispanic thug, or James Rebhorn kept getting cast as a stick-up-his-butt corporate type. The difference is those roles never turned Walter into a bigger name—maybe playing a string of hobos and carnies isn’t the best way to endear yourself to America. Still, he’s had plenty of other, memorable roles, which I will hopscotch through in no particular order. 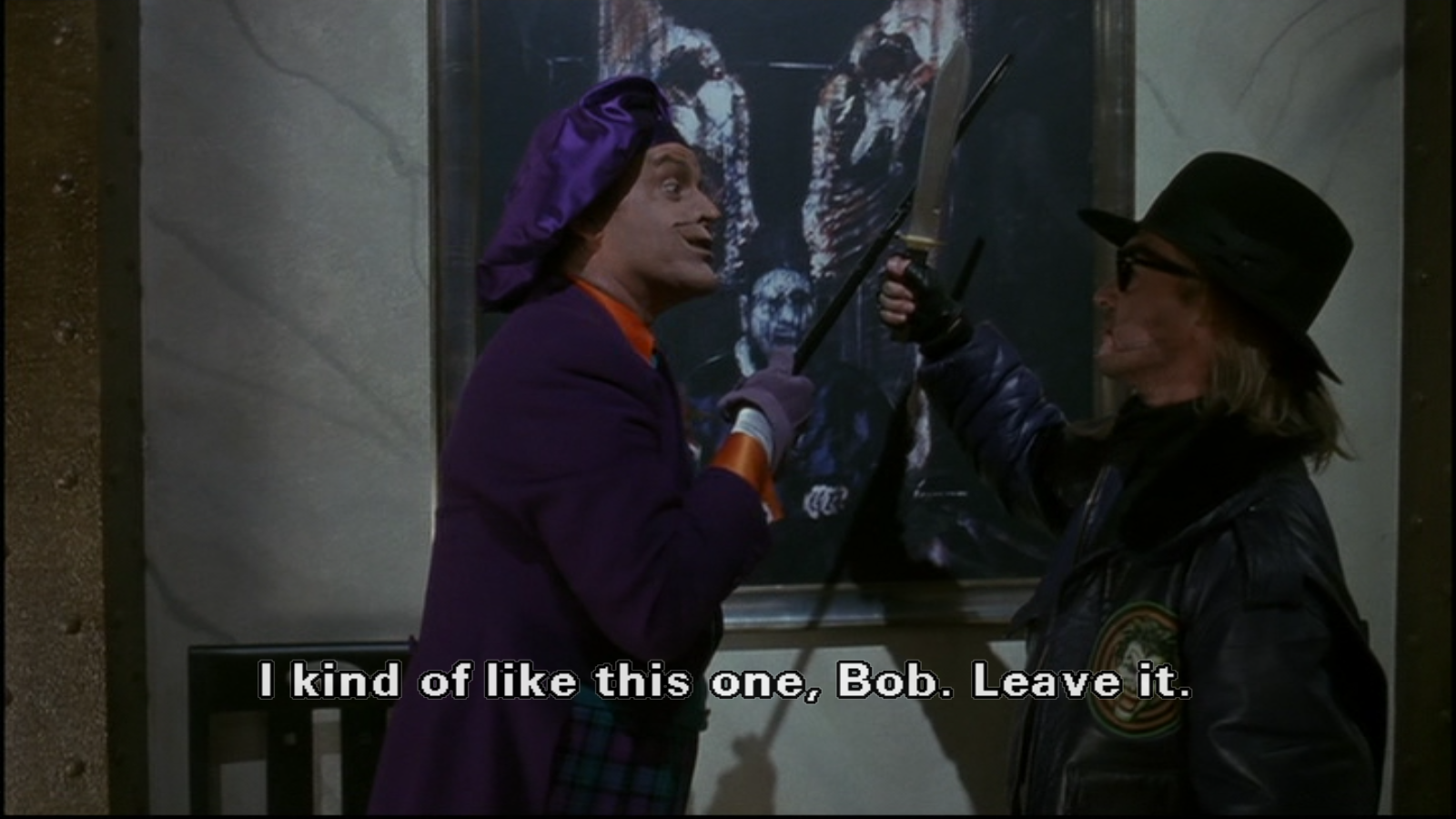 Jack Nicholson actually cast Walter in this, his best-known role. When Tim Burton told Jack he could bring someone in to play the Joker’s “Number One Guy,” Nicholson knew who to pick. They’d worked together on a half-dozen films by this time, including Goin’ South, which Jack directed.

Bob is an interesting role, because he was with the Joker before he became the Joker, then stuck with him despite the transformation and psychosis. Walter had to stake out territory on-screen against Nicholson and Michael Keaton/stunt men in ridiculous outfits, and retain some amount of sympathy from the audience, especially since this underplayed shocker was coming in the third act:

Loyal to the end. Anyway, Walter already knew by then how to hold his own against an imposing screen presence.

How would you like to be cast as the little guy in a movie with Arnold Schwarzenegger, Wilt Chamberlain, Grace Jones, and Andre the Giant? This may have been Walter’s biggest role, in terms of screen time and lines, though I can’t really say for sure, as he has more than 170 credits under his belt. As the scrappy thief Malak, he’s mostly around for comic relief and the occasional moment when he can help the hero through guile rather than strength.

That same year, he appeared in one of the greatest cult films of all time. Walter’s turn as Miller, the philosophical auto mechanic, won him a Saturn award for supporting actor and gave us memorable soliloquies like this one, a barely coherent ramble about time machines and South America, which he punctuates with an undeniable kicker about cars.

I love the way he delivers those lines, along with the framing of the scene. Just a dimly lit two-shot, split up in the middle by a wide shot showing the dreary afternoon in a vacant L.A. lot. Walter’s deadpan delivery sells just how mundane the crazy shit you see in life really is. He’s as earnest and unimpressed by his own insights as someone telling you the Dodgers need to hire a better setup man, or that the city’s high taxes are driving small businesses to Glendale.

In a movie full of creepy scenes, Walter appeared in one of the top five. Silence is a master class in mood, and as I don’t know a ton about film, I won’t talk about it too much. Walter’s performance does a lot for me specifically because he’s not playing a scruffy weirdo; he seems uncomfortable in his suit and slicked-back hair, like a tentacled alien trying to hide in human society. Sadly, I could not find this scene on YouTube, so you will have to just remember it. Walter is the one who tells Clarice that bodies found in the river will often have debris in their throats or stomachs. 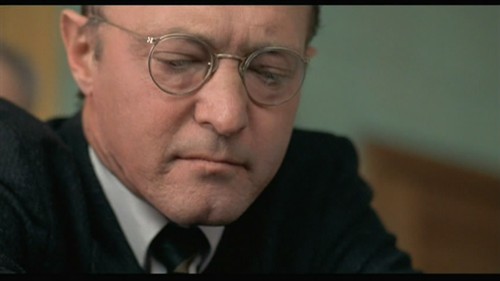 Need someone to play your grizzled, drunken cowboy chef, against big faces like Billy Crystal, Jack Palance, and Supergirl herself, Helen Slater? Walter made the most of this bit part, and among the various actors playing cowboys in this movie, he seemed the most likely to have actually lived his part. Wish I had the scene where he drives the chuck wagon off a cliff while displaying a face he painted on his bare ass, but this will have to do for now.

I actually haven’t seen this movie, but Walter’s role is apparently a key one, as he slips documents of some sort to Brockovich to prove the water was contaminated or whatever. By now I suspect Walter was recognizable enough that most moviegoers knew when they saw him that this little encounter at the bar was important. It’s like when they interview three suspects on Law & Order, and two of them are no-name actors, then the third is Paul Giamatti.

It’s likely Walter knew he was never going to be big. He’s always taken even the smallest of parts, including three “uncredited” roles in 1997 alone. Like most working actors, he’s done TV as well as movies, lodging one-offs and short stints on ALF, Moonlighting, Hill Street Blues, Get a Life, and Freddie’s Nightmares. The role of Larry on Newhart (“Hi, I’m Larry, this is my brother Darryl, and this is my other brother Darryl”) was written for him, but friend and fellow character actor William Sanderson got the role after turning in the better audition (according to a Random Roles interview Sanderson gave to the A.V. Club). Walter was set to be a regular on David Lynch’s Twin Peaks follow-up On the Air, playing a TV sound effects technician with an odd vision disorder, but this unsurprisingly weird show was canceled after three episodes.

His two other biggest television roles pretty well sum up Walter’s career. On Nash Bridges, he played Angel, a homeless man who dressed as an angel (complete with wings) and offered occasional words of wisdom to Don Johnson. Meanwhile, on Reno: 911 he was the inept sheriff of Reno, who showed up so infrequently that the deputies couldn’t remember his name. He later died after eating too many Snickers bars, due to a peanut allergy. 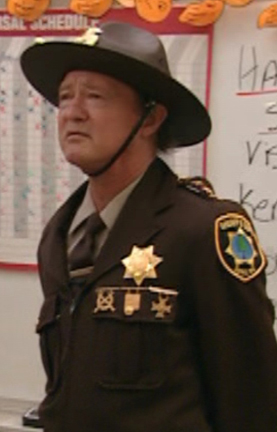 Despite the “fun rascal” quality of most of these roles, Walter has played true villains at times. Along with Sanderson, his character attempted to rape Sissy Spacek in 1981’s Raggedy Man, and his appearance in the 2010 I Spit On Your Graveremake wasn’t much nicer. His character in Beloved, one of his many Jonathan Demme films, is credited only as “Slave Catcher.” And let’s not forget the role of “National Enquirer Editor” in Man on the Moon. Shudder.

Walter’s revved up his television work in recent years, possibly because he hasn’t gotten roles in any decent movies since 2004’s Manchurian Candidate, another Demme film. That’s a shame, and it’s probably due to his age (he just turned 69). Now he’s stuck in D-grade horror flicks with the likes of Lorenzo Lamas and Kevin Sorbo. The occasional appearances on basic cable schedule fodder like Southland, Medium, Cold Case, Criminal Minds, Veronica Mars, and It’s Always Sunny in Philadelphia (surprise – he played a bum) will keep him cashing those USA/TNT/FX rerun residual checks for quite some time.