Greetings, everyone. Not too much to report today, box office wise, as we have yet to breach the golden shores of Pandora. Tuktirey, Colonel Miles Quaritch, Mo’at, Parker Selfridge, all of our best friends will be there. But before we get to shake their hands in glorious IMAX 3D, we get to meet… Jim Parsons?

Michael Showalter’s true-story romantic comedy Spoiler Alert, in which Jim Parsons plays a TV critic who falls in love with a man (Ben Aldridge) who gets cancer, expanded wide this weekend in ninth place with $700k, while Spielberg’s The Fabelmans got a couple more theaters and only dropped 7%, ending up in seventh place with $1.18m. The top of the box office goes to Black Panther: Wakanda Forever for the fifth week in a row with $11.1m, but David Harbour and his Violent Night held on surprisingly well, only dropping 35% for an $8.7m second weekend. Universal has released a lot of successful small genre movies like this, and they have a solid slate lined up for the winter (M3gan, Cocaine Bear, Knock at the Cabin) to prove that a theatrical hit can be made from a modest budget and a good time.

In limited release news, The Whale made a huge splash at the box office, opening with $360k in only six theaters; that’s an incredible debut and is 2022’s highest per-theater average so far, even beating the big comic book movies. With Brendan Fraser a lock for an Oscar nomination despite mixed reviews, A24 is releasing the movie wide on 12/21. I haven’t seen it so I can’t share my opinion, but be prepared for a lot of articles!

Sam Mendes’ Empire of Light, an Oscar hopeful that has racked up some borderline negative reviews despite the presences of Olivia Colman and Roger Deakins, opened in 105 theaters this weekend with a fairly dismal $160k. Searchlight may lose this one as an Oscar hopeful, but the Golden Globe nominations are tomorrow morning and they always make really dumb decisions, so we’ll see. No word yet on what the wide release plan is or whether there even will be one. Also, there appears to be some sort of killer Grinch movie out called The Mean One, and that did better than Empire of Light, so good for them I guess. 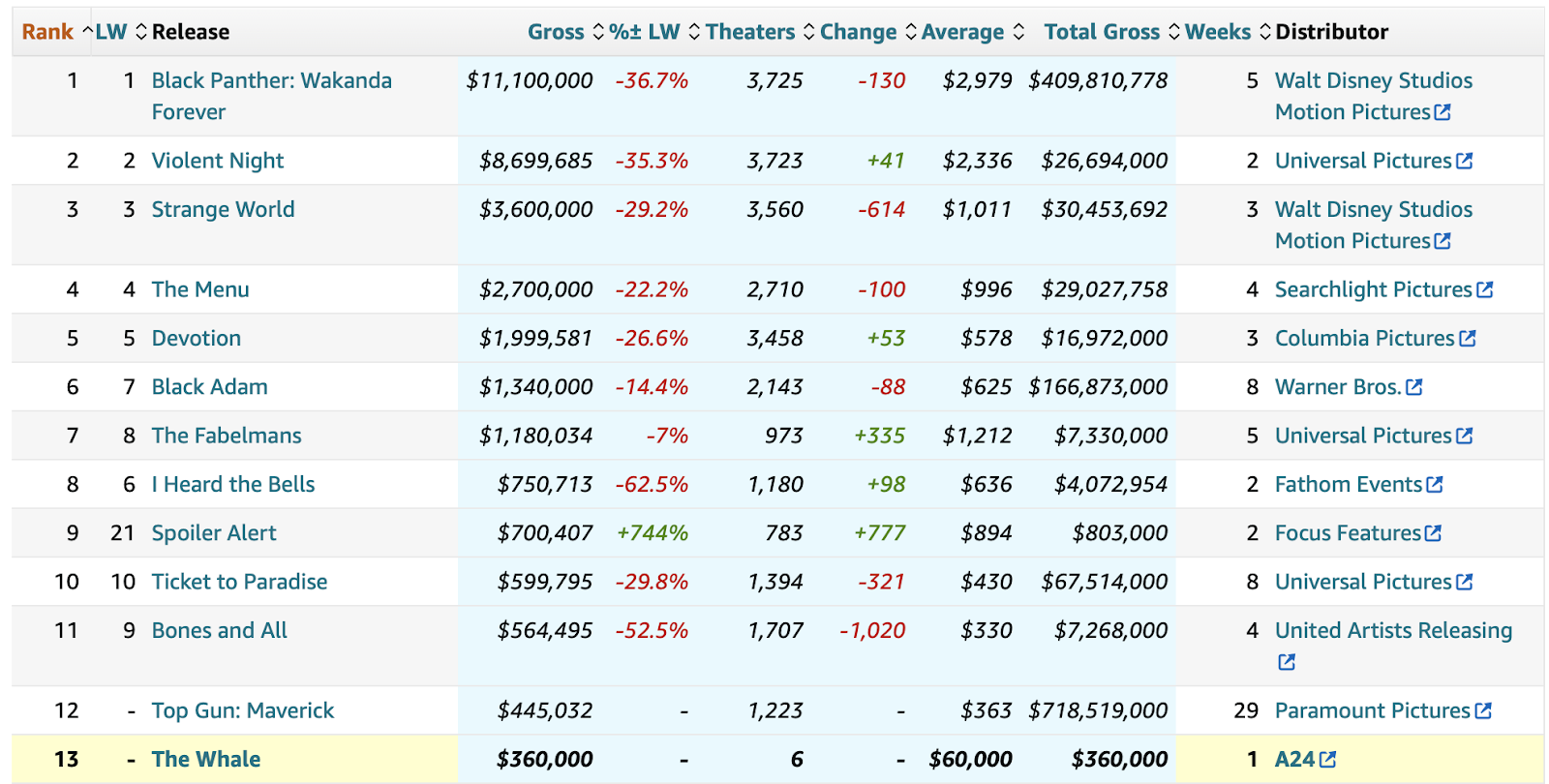