Hello everyone and Happy Giftmas! Hope you saw some good movies out there this week. The post-Thanksgiving week is typically slower at the box office, and this week is no exception, with the debut of only one new film at the box office. Tommy Wirkola’s action-comedy Violent Night, starring David Harbour as an alcoholic and violent Santa, earned $13.3m this weekend on only a $20m budget, a pretty good start for this R-rated genre movie. High-concept movies such as this have succeeded at the box office recently (Smile, Barbarian) and Universal has a solid slate of slightly gonzo fare for 2023. With a B+ CinemaScore and a 70% Rotten Tomatoes score, notices are positive enough to keep it going through the holiday season.

In third place, Disney’s Strange World dropped precipitously with a dismal $4.9m weekend, which is reported to lose the studio over $100m. It’s easy to blame bad marketing for this sort of thing, but when the marketing doesn’t show any of the plot or characters, and then the movie turns out to be mediocre (lower reviews and CinemaScore than most Disney cartoons), it’s a worthwhile target to blame.

In holdover news from last week, I’m not reporting on Glass Onion: A Knives Out Mystery, as Netflix is currently lighting money on fire by not releasing it. Universal is also lighting money on fire by not releasing The Fabelmans, sure to be an Oscar powerhouse, in more theaters in its second week of wide release. It’s only playing in 638 theaters right now, and with the slow month it could be platforming wider, but instead it’s dropping 43% with no expansion. (Having seen the movie, it’s really good, and the marketing misrepresents huge parts of it, which are way more complicated and compelling than they appear to be.) Bones and All is also dropping 47%, but that’s in almost 3,000 theaters, and playing with less lofty goals.

The lack of new Hollywood product means a series of specialty openings can also thrive. Fathom’s I Heard the Bells, a Christian biopic of Henry Wadsworth Longfellow, opens at seventh with $1.82m, while Crunchyroll’s anime The Quintessential Quintuplets Movie fails to make much of a dent with $502k, and a two-week IMAX re-release of Top Gun: Maverick (remember that movie?) scores another $700k.

In limited release news, A24 expanded military drama The Inspection to 135 theaters after a respectable showing at the Gotham Awards and Independent Spirit Awards, but it only made $85k. They also opened The Eternal Daughter, with two Tildas for the price of one, in 29 theaters and made just $33k. Focus opened Spoiler Alert, a Michael Showalter romantic comedy starring Jim Parsons and Ben Aldridge, in 6 theaters in NY and LA before its wide release next week.

Next week, Spoiler Alert goes wide while Searchlight opens Sam Mendes’ Empire of Light in major cities and A24 opens Darren Aronofsky’s The Whale in an as-yet-unspecified number of cities. Will audiences turn up for Jim Parsons’ Smurf-themed bed? See you next week to find out. 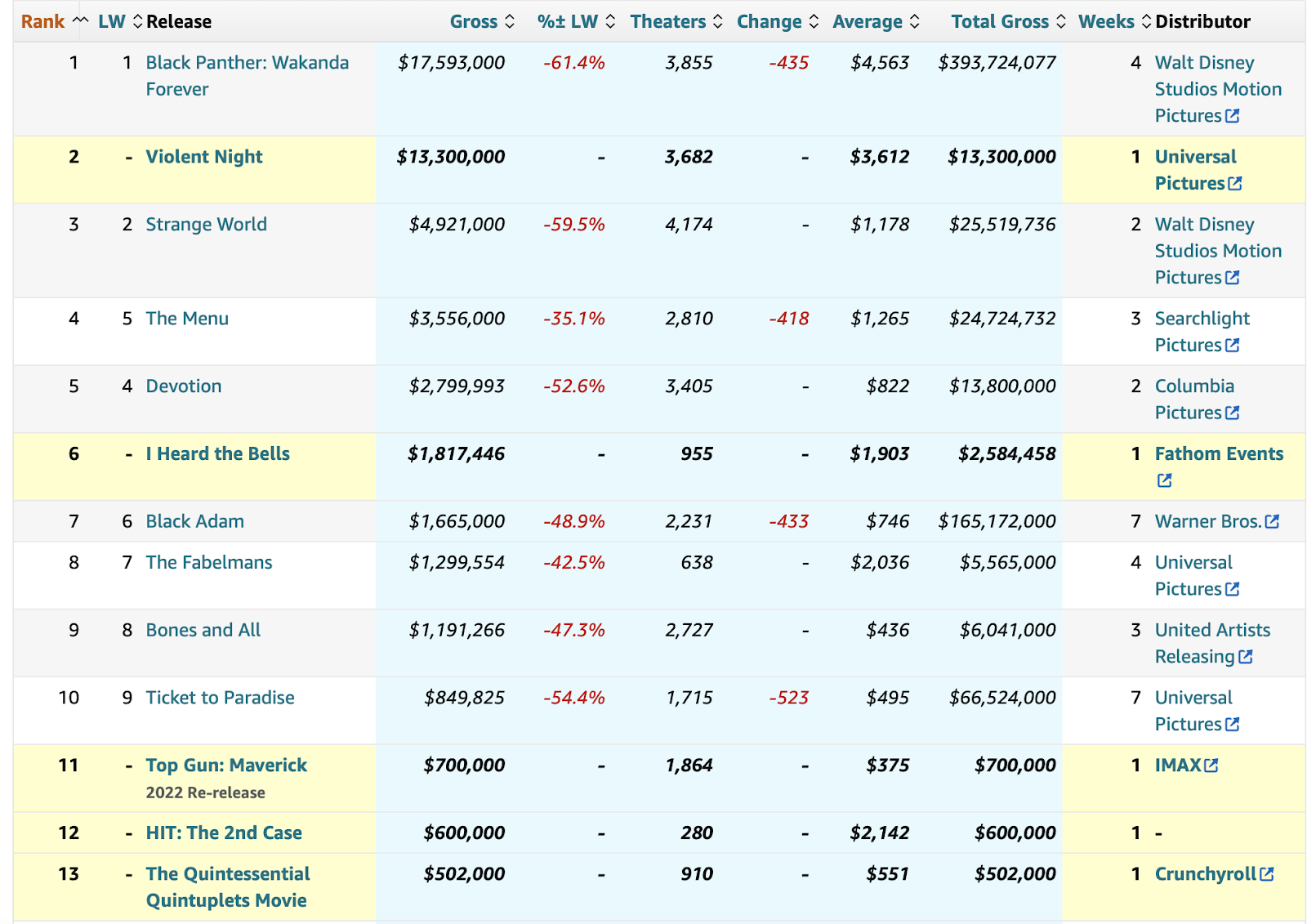