One type of Chinese film that I feel gets overlooked in the West is the small village dark comedy. They are like a Coen Brothers dark comedy, but with less of that pesky extra-textual stuff. They feature sniveling cowards and obnoxious idiots who are often coated in dirt. It is the antidote to the candy-coated urban romances, the CGI-soaked nationalist spectacles, and the dreary meditative visual theses on the human condition.  And, yes, there may be a touch of classism and anti-rural prejudice in the making of these movies, but they entertain me. So there. This movie, which is not Tristam Shandy, is the first of WTF ASIA’s completely unintentional bird trilogy. 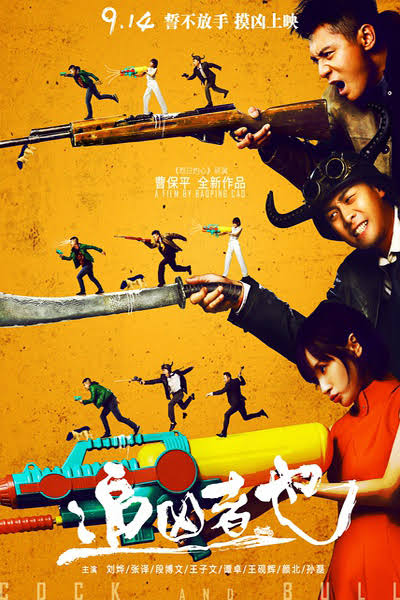 In a remote area between several Southwestern Chinese villages, a man known as Brother Cat is found murdered. His widow points the finger at Song Lao’er, a mechanic from the same village who had gotten into a fight with him once when Brother Cat “intervened” in a fight between their teenage sons. Song vehemently denies it, and tries to point the finger back at her, but rumors have already gotten out. And while he is free due to lack of evidence, the cloud of suspicion hangs over him. Already with a less-than-stellar reputation in the village, this threatens to make a bad situation worse.

Song reasons that Brother Cat must have gone to the murder scene on his motorcycle and that the killer must have made off on it. This a bit of a shaky theory and the police are reluctant to follow up on it. So, Song, upset about the rumors about him and the effect that they have on his son, decides to conduct his own investigation. Of course, since the police told him to lay off and have also been following him, he has to be careful. And he isn’t.

One day at his shop, Song sees a young man on Brother Cat’s motorcycle. He follows the man to another village. Song sneaks across the rooftops as he spies the man trying to make arrangements to sell off the motorcycle. Song gets closer to the man and chases after him. However, as careful as he isn’t, Song was immediately spotted by villagers and they formed a mob to capture him. With a big net. Apparently, they believe that he is the man who had been kidnapping children from their village.

The police eventually force the villagers to free him and things are eventually worked out. But the young man, identified as Wang Yaoquan, has gotten away. Song is enraged. He had gotten so close to solving the case and clearing his name, only to be accused of a completely different crime and utterly humiliated. Fortunately, Song is now able to at least convince the people of his own village that he is innocent and that Wang is the guilty one. And, after taking the Wang’s family pig as reparations for all of his suffering, Song sets out to find Wang Yaoquan and…uh…bring him to justice.

I realize that none of the previous paragraphs exactly scream comedy. That is, however, one thing that I enjoy from this type of movie. It takes a story that could be a straightforward drama on paper and injects so much humor into the script and direction that it sprints past dark comedy into plain-old comedy. Sure, some of the comedy ends up being mean-spirited and some of it doesn’t work. And, yes, it gets some of its laughs at the expense of rural people. But, well, it’s funny. After all, at least in this case, one of the most pathetic and despicable characters is a city slicker.

Behind all of the yokels jokes and a resolution that may have been a concession to PRC requirements, there is a bit of reflection on Chinese culture and how it fares in the 21st century. There is a sense that family obligations and community needs may come into conflict even before the destructive element of individualist pride knocks things over. There is also a theme, particularly at the beginning, of how mob justice is not justice, particularly when it is based on rumors and faulty intelligence. Very faulty intelligence. Now, granted the movie does not harp on these themes and including them may not have necessarily been deliberate on the part of the writers…and I cannot really explain further without spoiling much. But, sure, the movie gives the viewer something to think about…sort of…Actually, now that I think about it, perhaps it…look, it’s a silly comedy; lots of scenes where guys fall down and get hit on the head.