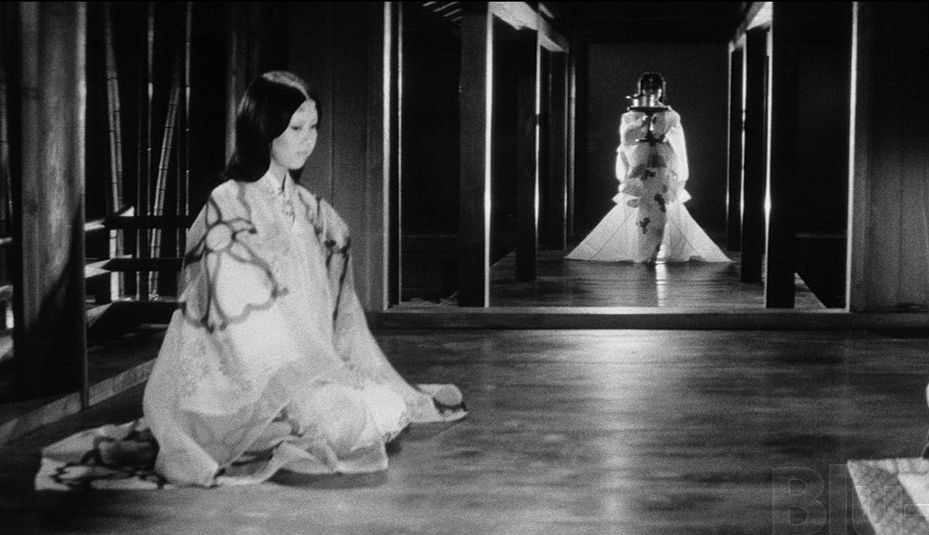 I guess when I “complain” about how narrow a subgenre is I should probably look ahead to what the next one is before saying something. While my reasons for separating Japanese ghost films from the general supernatural category are largely because I already had this disc sitting at home and I wanted some justification for taping two likely terrible Poltergeist films, the approach to ghosts by Western filmmakers is much different that than of Eastern filmmakers and it’s hard to deny the very similar feel which runs through these Japanese (and for that matter other East Asian) films owing largely to differing cultures (namely the Japanese Shinto and Buddhist beliefs as opposed to the Western style more rooted in Christian mythology). I’m sure someone more qualified than I can discuss the deeper meaning and reasoning for the white clothes and long black hair of Yūrei (the basic Japanese ghost) the look is tied into funeral proceedings.

While the genre is now known for such films as Ringu, Ju-On (see below), Pulse (the official movie for the 23rd), and Dark Water which were all remade in the US to mostly lackluster results (aside from the superior The Ring), the genre dates back to the 50’s and 60’s (in film anyway) with films such as The Ghosts of Kasane Swamp, the great Tokaido Yotsuya kaidan, the also good Kwaidan, and of course today’s film. The general theme of these films is for the ghosts to achieve their revenge or whatever is holding them back from passing on completely (a familiar theme in Western stories as well).
The film wordlessly opens with a group of soldiers stealing from, raping, and murdering a mother and daughter and law and it’s a bold choice and horrifying in a very real sense. The lengthy, wide static shot of the soldiers leaving the hut and disappearing into the bamboo grove before smoke starts to billow out of the hut that follows it is amazing and beautiful. It’s a very minimalist opening but such an effective and memorable one. It’s over 10 minutes before the first bit of dialogue is spoken, but by that point it’s established more atmosphere than most films do in their entire length.

And atmosphere and style are this film’s selling points. The film is filled with expertly used shadows and fog and perhaps my favorite visual portrayal of ghosts. There’s no jump scares to be found here, they appear and disappear required and their movement is otherworldly yet in a way still unsettlingly tied to reality. I feel like I am doing the film a disservice since style over substance tends to be considered an insult, but here there is plenty of substance generated from all the style but I can’t imagine the film being any good in the hands of a less visually adept filmmaker but could very well be worth watching if it lacked the compelling drama. I tend to be rather down on silent films and despite their being plenty of sound even during the lengthy wordless or mostly wordless segments, the more subdued acting just reinforces that it is possible to effectively convey emotions without overacting and hamming it up. It’s a great rebuttal to anyone who claims that such acting is necessary and that we should accept it.

The only thing I can seek to compare it to is Under the Skin with humanity and none of the unscripted bits (or what I wish that film had been). It even has the strong sense of sexuality and seduction pervading through it. Last year it took me to day ten before I saw my second of three classic movies. This year I’ve found it on day two. It’s shaping up to be a good year. 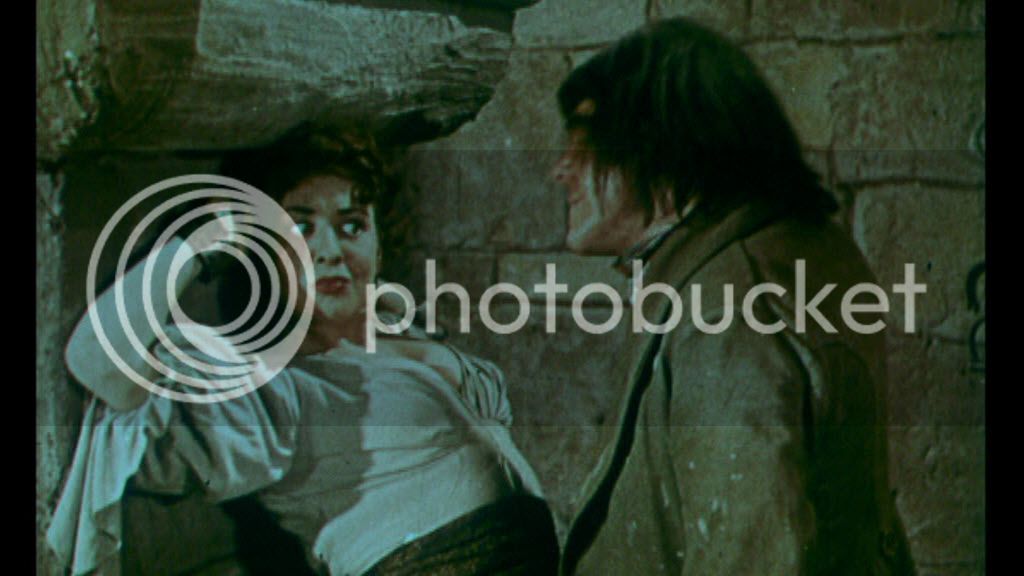 Despite the similar name, there is no relation to the previous film (this will make a lot more sense when after I get to my AIP day) and it is thankfully not an AIP film despite the hunchback assistant Carl more than a little resembling the abomination that is that year’s Frankenstein’s monster from How to Make a Monster. It’s still not a good film but you know, baby steps. Despite the title, this isn’t really a vampire film which as indicated by the existence of a hunchback assistant, it has far more in line with the sci-fi and Frankenstein subgenres and not in a experimenting to create a vampire of Blood of Dracula (Well this system is already backfiring) but just in the typical mad scientist stuff.

The vampire stuff is merely a McGuffin as the villain is simply an executed man (albeit infected with something that simultaneously is killing him and allows him to be resurrected) returned to life with a heart transplant (science doesn’t work like that but whatever). It hardly affects the plot aside from all the experiments being with blood and the film being set in 19th century Transylvania. I guess if you squint hard enough blood transfusions and blood diseases are sort of like vampirism. Okay, they are nothing like that and it’s really a misleading title but I’m trying to give them the benefit of the doubt. The film is mostly bland and forgettable which may be a worse crime than being lousy, especially with horror films. It does feature longtime Hammer actress Barbara Shelley in a major role so that’s something. 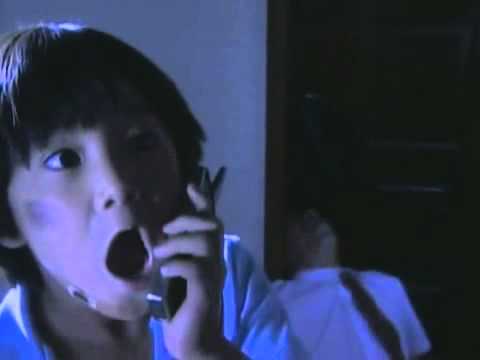 Fück you Takashi Shimizu and your obnoxiously named sequel Ju-on: The Grudgewith your attempts to basically pretend it’s the original film, ignoring the two prior films in the series. Also screw you publishers, Comcast, and everyone else who makes that mistake, frequently mislabeling the Ju-on: The Grudge as the original (I saw it first accidently because it was mislabeled on a TV listing) feature film and for making this movie so damned hard to find. Well finally Youtube has spit up a copy of the real deal so I can actually start at the beginning and see another role from Chiaki Kuriyama (the scene stealer from Battle Royale and Kill Bill) and years of waiting has finally paid off. Going into the film I’ve of course seen the aforementioned and mediocre Ju-on: The Grudge, its lousy American remake The Grudge and its embarrassing sequel The Grudge 2 (this may be the most annoyingly titled series of all time) and the shorts Katasumi and 4444444444(which even preceded Ju-on: The Curse as part of the TV film Gakkô no kaidan G) all directed by Shimizu. Katasumi is the only one that actually stood out but still I press on.

While Ju-on: The Curse is frequently just referred to as Ju-on, I’m going to use the full title because it’s too damned confusing otherwise. The film is split into six vignettes much like it’s sequels and right off the bat it’s clear why these films are intentionally buried (despite being canon). They are very visibly turn of the century DTV films (as opposed to the theatrical sequels) shot in nine days (combined as best I can tell) and it’s quite a letdown after viewing the visually sumptuous Kuroneko but I’m not going to bemoan a film for its lack of budget (or let naming off of the hook). The static shots here just look amateurish and at best can be called utilitarian. Once again we are brought into a story of a ghost held to this world after being killed, specifically this time a not especially big house with lots of tight hallways instead of a gorgeous bamboo forest.

The low budget feel does have a small advantage of making it seem less polished and more “real”, the next logical step from found footage. The stories don’t really seem to come together though and it mostly feels like a bunch of thematically similar horror shorts. There’s some effective imagery but the film has an annoying habit of building to an image, build the scare chord, and then cut to black. There is plenty of potential (which best to my knowledge has never been properly capitalized on even if Ju-on: The Grudge looked better) but the best that can be said about it is that it is better than its circumstances would suggest.

It’s tough to call this a new film when 30 out of the 76 minutes are just taken from the prior one but I’m all for saving me time. Skip the first two segments and you have a four vignette expansion pack to the original. And really there’s nothing new to add here, it’s just more of the same. Everything I said in the paragraphs above still holds true and you could string these 10 segments together and there’s no real beginning or end. The segments may have them, but the film as a whole doesn’t feel like it has one. It starts and ends just as abruptly and I’m still not sure what the nonlinear narrative adds. 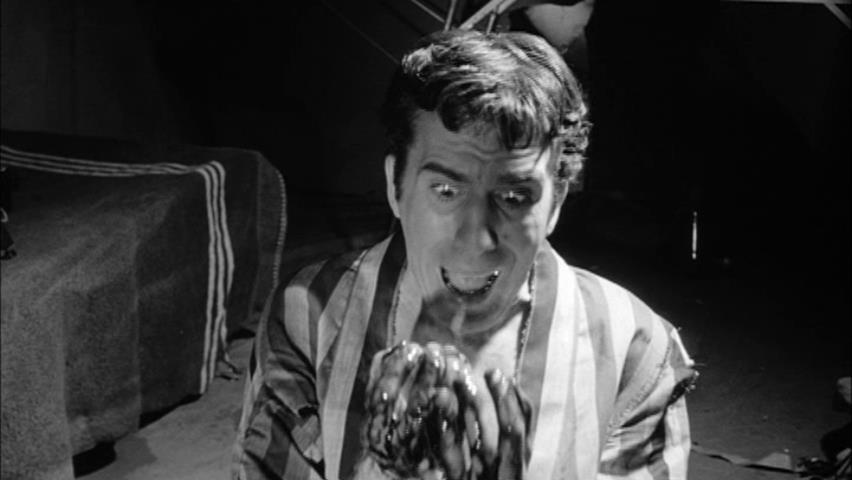 Two days in, three (well four) mad scientists already and we are far from done with the genre. It’s going to be a bigger shock if some aliens show up at this point heading into a sci-fi-horror title. At least this film has one unique thing going for it, and that it is one of the earliest splatter films and is fairly gore-y for the period. Well it actually has two fairly unique points in that SPOILER the mad scientist isn’t responsible for the murderous creatures, played here by glowing bacteria that eats away flesh (I love a good descriptive title), just a gigantic murderous dick sent to harness its power. He’s essentially Ash from Alien only being a biologist instead of a robot. END OF SPOILER

These bits still aren’t enough to save the movie, but it at least has the courtesy to be a fun kind of bad. We get such scenes as a lush actress who starts talking like Gollum while drunk, a hilariously silly beatnik arriving on a dinky raft called “Rosebud”, and a giant monster that looks like a kidney stone. It also gives us the most metal way to defeat a villain by SPOILER defeating it with blood .