Welcome everyone to the official start of Month of Horror 2016 (see the complete list here). First of is a beloved genre, albeit one that does not frequently find itself crossed over with horror all that frequently; the western. A subset of the Weird West genre, horror-westerns only date back to the late-1950’s with the release of films such as the generic and poor The Beast of Hollow Mountain, Teenage Monster, and Curse of the Undead (we’ll get to that one in a bit). Since then, we’ve seen the release of the truly terrible Billy the Kid vs. Dracula (an official selection for me in 2013), the great but hardly horror aside from its supernatural-ish feel High Plains Drifter, the beloved for some reason Near Dark, the great but quickly declining in quality Tremors films, the garbage John Carpenter film Vampires, Ravenous, the mediocre and tired sequel Ginger Snaps Back: The Beginning, and the decent The Burrowers.

And that’s about it in terms of noteworthy titles. It’s not going to be often that I can list every single one fairly quickly in a subgenre and even then we have to reach a bit of titles which hardly feel like horror (High Plains Drifter) or films that stretch the western side. While there is one obvious reason for this in that both are historically niche genres (if both with legacy of low budget filmmaking) there is another reason; it’s hard to generate horror in a western setting. The western is known for its emphasis on wide open spaces and the expanse of the American (or really any country) West which is frankly an enemy of horror. It’s hard to feel scared or stranded when there is an open expanse in any direction though I guess the tired trope of the faceless, omnipresent and threatening Native Americans is horror-esque. Ravenous and Ginger Snaps Back attempt to solve this by restricting action to an outpost while Tremors does it by making the monsters themselves huge (and by playing up the comedy) but with the possible exception of the former, no film has ever really succeeded at it from a horror perspective.

Bone Tomahawk certainly gets things off right with its cast full of horror veterans led by Kurt Russell (The Thing, Death Proof), Patrick Wilson (Insidious, The Conjuring), and Matthew Fox (Speed Racer, Lost) and a fantastic supporting cast including Richard Jenkins (The Cabin in the Woods, Let Me In) who gives a movie stealing performance, Lili Simmons (Banshee), David Arquette (Scream, Ravenous), Sid Haig (The Devil’s Rejects which had almost a western feel at times), Fred Melamed (A Serious Man), Zahn McClarnon (Fargo).

For the first hour and a half, you start to question if this really horror. There are certainly some horrific bits (they don’t even need to show much with Patrick Wilson’s leg pain though to really sense his suffering and almost feel it myself) but it’s a pretty straight western that feels like a modern day The Searchers. The film is slow building but thanks largely to the characters and ever present dread, I hardly noticed. And it’s that teasing early on that hangs over the film about who they are going up against and boy does it pay off. SPOILER The butchering of Deputy Nick is wonderfully gruesome and I can honestly say I was shocked David Arquette got reduced to an offscreen death. The film is tense, gruesome, often hard to watch, and occasionally rather funny. In a somewhat random bit there is a tiny scene late featuring one of the cannibals (weird that cannibalism feels like a minor point despite it being the supposedly defining trait) trying to figure out a gun that is a fantastic dark comedy scene. Saying a western looks great is almost a given (they just lend themselves to being photographed beautifully) but even beyond the scenery, the effects are consistently stellar. I got a real Hills Have Eyes (with better effects but less individual personalities) vibe from the inbred cannibals in the West but not so much that it feels derivative. END OF SPOILER I always like starting the year off (well sort of) with a something good and I can’t recommend the film highly enough. 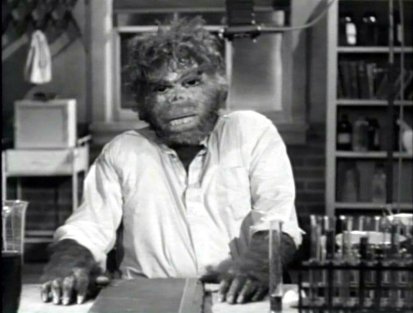 Technically, this film was my first horror movie of the month but that’s not important right now. Partly because it is terrible, generic anti-science garbage, and partly because fück you that’s why. I won’t get into too deep a discussion of the subgenre in these bonus episodes (unless they lack a proper day) but on a basic level you can separate much of the genre into aliens and mad scientists and boy did shitty 50’s movies love both. Mad scientist is the order of today and well… seen one, seen them all. In an effort to prove himself not an obnoxious, ethically questionable hack, our scientists turns animals (okay a single cat and two humans) into primitive versions of themselves with some regression and manipulation of DNA (he gives them a shot).

The cat turns itself into a sabertooth tiger that is very obviously a regular tiger with no tusks except in a single still photo. This doesn’t stop people from hilariously referring to the tiger as having huge tusks but you try strapping on prosthetics onto a tiger. The scientist turns himself (and apparently in the past his assistant) into THE NEANDERTHAL MAN which just looks like a low rent wolf man or maybe Mr. Hyde makeup sporting a thick beard and Mike Brady’s hair and possessing the power to kill people by roughly tackling them. So yes, this is just a bad Dr. Jekyll and Mr. Hyde but I will save discussion of that story until we get to the real deal. The film is stupid comfort food. The kind of film I love to watch this time of year with nothing working for it and more than a few bits of unintentional comedy wrapped up in a quick 78 minute package and an ending monologue that can basically be summed up as “He tampered in God’s domain”. I could watch this shit all day. The film is also notable for being the first movie for Beverly Garland (My Three Sons, D.O.A.). 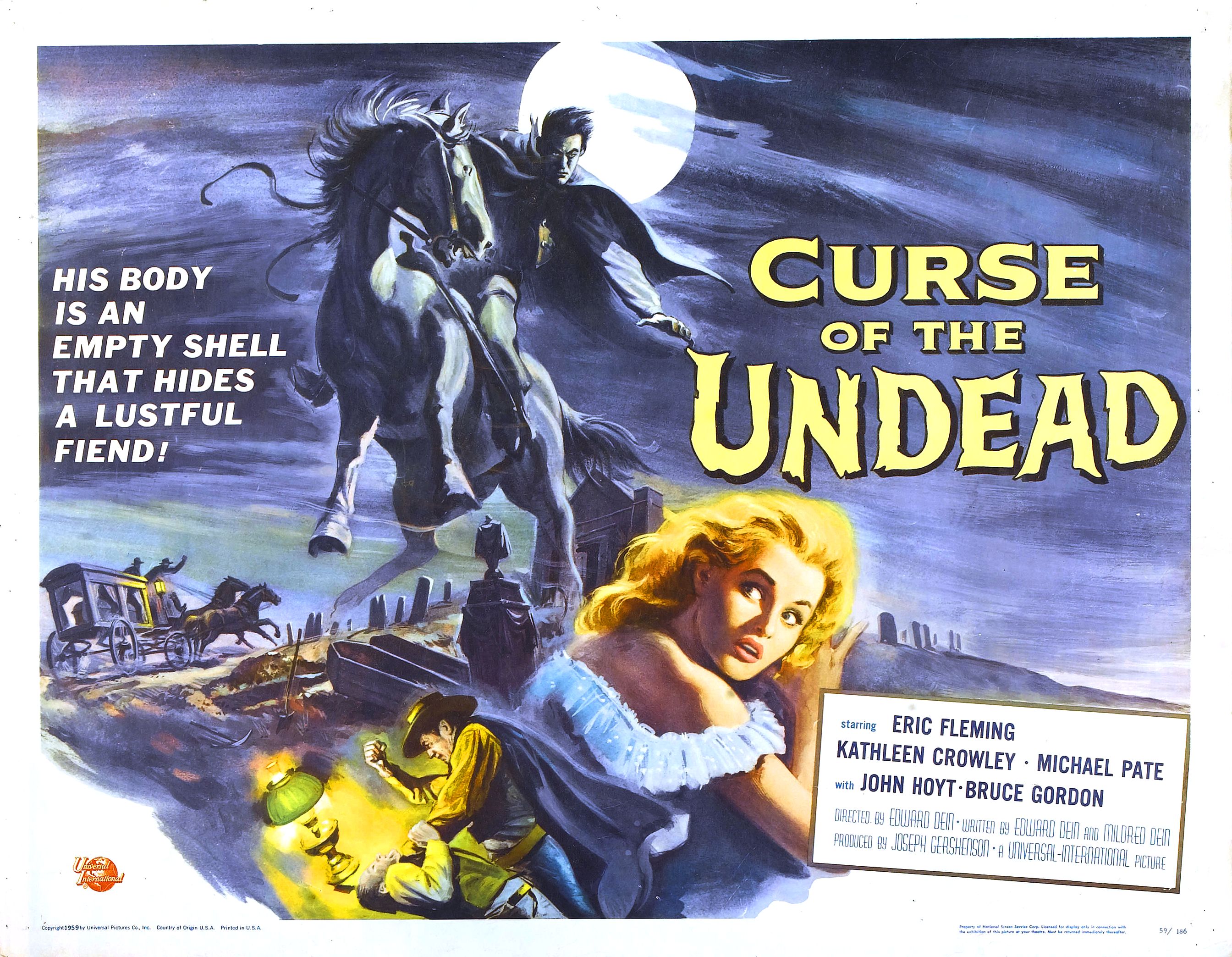 Vampire films are just about the last film you’d expect to pop up in a western considering the whole wide open spaces thing meaning a vampire epidemic seems even more ridiculous than normal. Yet between Near Dark, Vampires, Billy the Kid vs. Dracula, Sundown: The Vampire in Retreat, From Dusk till Dawn (using a loose interpretation of the word “western”) and of course this early horror-western, vampire films seem to be almost the default way of interjecting horror. I guess I shouldn’t be surprised considering the default usually falls back to zombies or vampires and wide open spaces with few people, most of them armed would make for a really huge logical leap to get to.

Here we have a standard western, the kind that feel like they were made over a weekend using spare sets and a budget of roughly two bits, but with vampires thrown in casually. I’ve seen this basic story of encroaching on land rights so many times and this may be the most undercooked of them all, yet it’s hard to deny throwing in vampires doesn’t liven up this dead horse a bit. Notice I don’t say good, but it’s interesting to watch as the characters try to act out a cruddy western not knowing they are actually in a vampire movie. It’s like a meta comedy is buried in here but only the viewer knows and can laugh at it possibly owing to in it originating as a satire (which has long since been stamped out of all self-awareness and wit). I give the film crap but I should give the film some credit for going to European mythology for many of its vampire facts (vampires being created by suicide and not being affected by sunlight) instead of just copying Universal’s Dracula.

I also have to give the film credit for getting stronger as it goes on, handling horror far better in all its shadows and mystery (and a more likable and sympathetic “villain” than any of the paper thin assholes that populate this town) as opposed to the undercooked plot that gets things started (SPOILER also killing that obnoxious shit anticlimactically certainly improved things END OF SPOILER) only to peter out in the background. It’s the reverse of From Dusk Till Dawn, changing the genre by throwing in vampires improves things.

I also watched How to Make a Monster and Blood of Dracula but I’ll save that for my talk on AIP films later in the month.