The quarterfinals brought some heartbreak, surprises and gladly not many VAR shenanigans. Here’s how the bracket looks now:

USA v England: This is some good tea

The US faced their biggest test yet and passed it defeating the hosts thanks to an enlightened Rapinoe who scored twice, including a goal in the first 5 minutes who made the US be able to dominate the match. And they did this not by possession, France won in that front, but by stifling the French forwards. Only Le Sommer had some chances really late in the match and the only French goal came from a set piece. The US did look shaky when their defense was pressed and didn’t know how to play from the back, France did not capitalize, though. Interestingly, the US has scored in the first 15 minutes in all their matches, this is something England should really pay attention to.

So yeah, England, they were superb, convincingly defeating Norway 3-0, including a stunner by Bronze. They had some defensive hiccups and Parris missed a pk, but you can’t really complain much after a 3-0. The key for England is to stand the American barrage in the first 15 minutes and then attack from the right side and pressure the defenders. Of course this is easier said than done as if they’re not careful, the Americans will take advantage in the counter and they are lethal. This should be an interesting match, for which I would not take sides… I mean, I do enjoy that it’s coming home!

Before the tournament started, the Dutch were considered one of the dark horses and they have delivered. To get here, they had to crush the Italian Cinderella story and so they did. It took them a long time and they could only break the Italian defense by set pieces, twice in a span of 10 minutes. It was cruel. But that’s reality.

On the other hand, Sweden came like big underdogs against a German team that not only had not lost they hadn’t conceded a single goal. And Sweden didn’t care, they put a bunch of people in midfield, stopping the German engine and making them run out of ideas fairly quickly. At the same time, they prepared for the counter and capitalized. It was a good plan that the Germans had no clue how to solve. I would say Netherlands has this, but I said the same about Germany.

In soccer other competitions:

Things have been more less as expected except for Honduras’ implosion, who did not even get out of the group stage and Costa Rica losing to Haiti which led us to them facing Mexico in Mexico’s biggest challenge in the Martino era. This did prove to be difficult as Mexico was only able to squeak by on penalties. On the other matches, the Caribbean did well with Haiti defeating Canada and Jamaica defeating Panama. Curacao tried but still lost to the US, but only 1-0. Our bracket now looks like this: 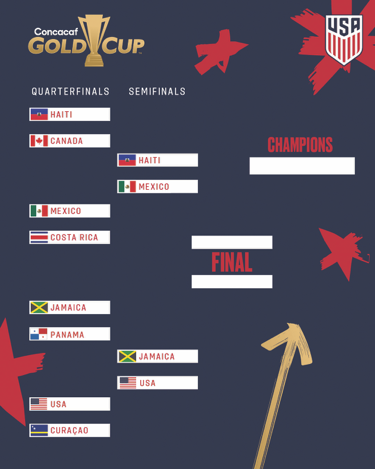 Nothing makes sense in the Copa América, Argentina was finally convincing and won 2-0 against Venezuela but Messi was a non factor, Brazil almost failed against a Paraguayan team that defended with everything they had and then missed in penalties, while the most convincing team of the competition, Uruguay, got denied thrice by VAR and lost on penalties. With the good news here that the one that missed was Suárez