This took way longer then I expected to write mainly researching all the artists involved, but here we go.
So something that gets forgotten a lot in the creation of animation, is that the people making the cartoons you like, are also huge fucking cartoon nerds.
That’s how stuff like the Akira bike slide ends up happening. 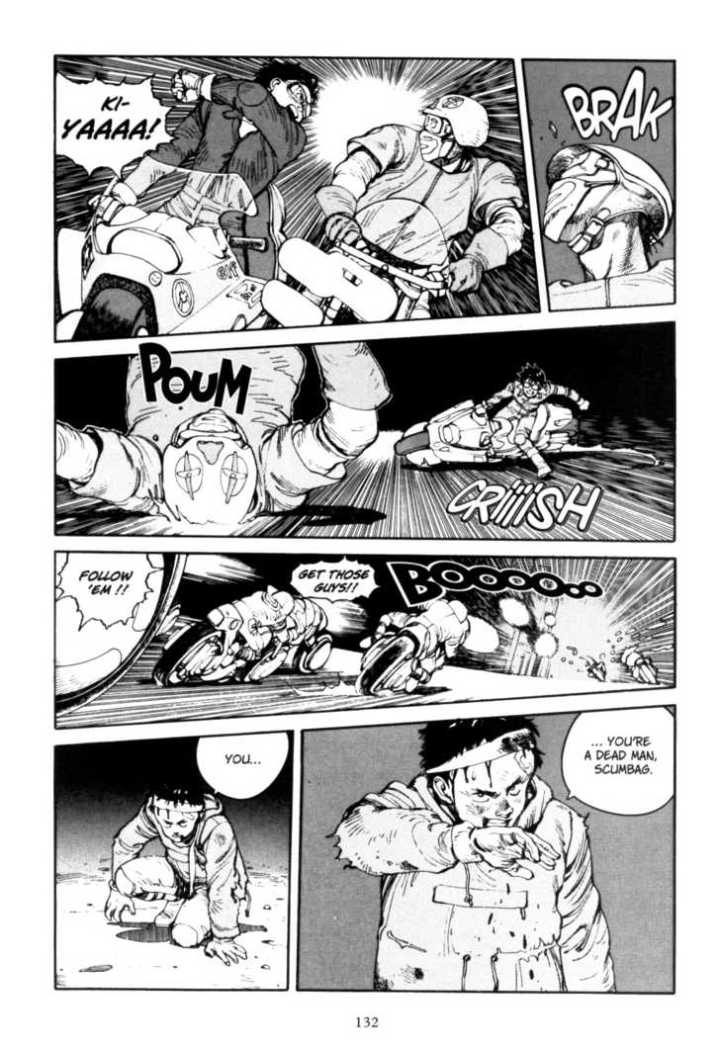 Starting in the manga released in, around 1982 (I’m not sure on the exact year the volume with the slide was in) and it’s pretty low key. It happens in the background and is more of a background event happening in the background while the main focus is the clown gang dude eating hard shit.

Of course without the movie I wouldn’t be writing shit, animated for the 1988 film by Koji Morimoto, it turns what was a background into a showcase for Kaneda being a bad ass.

And there’s a lot to talk about with the animation here that makes it so distinctive, the crackle of electricity from Kaneda’s super future bike, the three points of contact making the three dust trails, combined with the absolutely pornographic quality of Akira’s  animation makes it a super distinctive scene of animation that would go on to become
something of a legend to animators and become used and homaged again and again in animation.

—————————
Batman TAS 1993
—————————
The earliest instance of the Akira Bike Slide in animation I can find is from the episode Robins Reckoning (part 2) of Batman: The Animated Series from 1993. A landmark episode for the series it received an Emmy for most outstanding half hour or less program, and is widely considered one of the best episode (two episodes) of the show. There were 4 story board artists on this episode, Joe Denton, Curt Geda, Gary Graham and Doug Murphy it could have been either of those 4 men that added the reference, or it could have been episode director Dick Sebast who got it’s inclusion.

This is one of the few references that doesn’t start on an extreme close up of the characters face though, instead having Robin enter from the bottom of the screen. Though it’s worth noting that with the episode coming out in 1993, and most likely being in production in 1992. They would have, at best had a VHS copy of the movie for reference without any ability to frame by frame or shit like that. So like cut em a fucking break ya know?

—————————
Your Under Arrest 1997
—————————
The next reference to it I could find is from episode 17 of You’re Under Arrest. Storyboarded and animation directed by Yukina Hiiro from 1997,a lmost a decade after Akira and the first reference to it in anime. Daimaru Nakajima (the fucker on the bike) basically has a running theme of being the biggest dicked bike rider ever. So of course when you give the Akira bike slide to someone it’s gonna be him. It goes back to starting on the extreme close up of Daimaru to sliding out to the wide shot, while adding a subtle
camera movement missing in the original. It’s also worth noting that both this and hte Batman one lack the three points of contact of the original, wich in my oppinion make them look kinda awkward. While Kaneda has his foot planted ready to support the weight of the bike when it comes to a stop, both Robin and Daimaru should probbably face plant like clumsy fucks when they stop but I don’t think that’s really the vibe they’re going for…

—————————
TMNT 2003
—————————
TMNT 2003 was a show that wore it’s anime love on it’s sleeves, so it’s no surprise to find the Akira bike slide here as well. Done twice at that, once for the intro and another time in the episode Meet Casey Jones (2003). With Kirk Van Wormer storyboarding the intro sequence (who was also a story board artist on Biker Mice from Mars and now I’m wondering if that threw a bike slide in there somewhere that I haven’t found?) And as far as I can tell one of 9 possible story board artists for the episode (Including Kirk Van wormer again) These are probbably so far the most accurate akira bike slides. They have the three points of contact (Though the in episode one leads to 5 trails of smoke from that interestingly?) The start from close up to wide shot, the in episode appearence even includes the electric sparks. This seems to really be the point where the meme starts to get going.

—————————
Clone Wars 2003
—————————
Still in 2003 (A good year for akira slides) Genndy Tartakovsky included this slide in the 4th episode of his Clone Wars mini series. The mans included countles other anime references in his work, so it’s no surprise that this one made it in. It even takes place as the skid to the stop after a succesful game of chicken mirroring Akiras context not just shot structure.

—————————
Advent Children 2005
—————————
By this point in the narrative I’m trying to draw with this article, the slide had become familiar enough in the consciousness of at least the animators in on the joke that they started playing with the format, Advent Children was a movie that was defined by how dumb and over the top it was, so if it was going to put in this Akira Slide homage it was
going to do it in the most show boaty way imaginable. I’m not sure who the mad genius responsible for this amazing bullshit is, weather it was director and zip fetishist Tetsuya Nomura, co-director Takeshi Nozue, or one of the storyboard artists Manabu Himukai or Kazuhito Yamamoto. Or maybe Battle Motion coordinator Jun Murakami. I don’t have a
concrete answer, but I do know that they’re a fuckin’ legend.

—————————
Guren Lagan 2007
—————————
This one could even be debatable that it is an intentional reference, but if you don’t think it is, then you can make you’re own list. Fight me fuckers. From the first episode of Guren Lagan, we see how people are changing the format of what a homage to akira can even be at this point. This one is fairly hard to credit, the episode only has one credited storyboard artist and their listed as a storyboarder for the intro sequence. Which leaves it in the hands of one of the 22 credited key animators.

—————————
Pokemon 2009
—————————
Episode 581… jesus fuck pokemon has been going for a while… sorry, Episode 581 of Pokemon “Stealing the Conversation!” from 2009 (story boarded by Masaru Koyama, with animation director Izumi Shimura) introduces bad ass aviator shade wearing akira bike sliding officer Jenny. Who gets to show off how fucking bad ass she is with a rad
akira slide. This one adds a slight tracking camera move again, like the you’r e under arrest one, but is otherwise a fairly standard Akira Bike slide. Though with how much they’ve stepped up the pokemon animation quality in recent years I’d love to see them try it again.

—————————
X-men Origin Wolverine 2009
—————————
WERE BIG TIME MOTHER FUCKERS! WE ARE LIVE ACTION AT THE MOVIES IN…. oh… Wolverine Origin… uh… fuck. Still directed by Gavin Hood it’s pretty cool to see the reference thrown into a big budget movie. It’s pretty modified due to having to work in real life. But still seems to be a pretty clear reference.

—————————
Adventure Time 2011
—————————
From episode 46, Go with Me, we get this Akira Slide by Marceline. Storyboraded by Ako Castuera and Tom Herpich and Directed by Larry Leichliter. It’s got a lot of the same problems as the Batman one, but still a great little throw away gag.

—————————
Nisemontogari 2012
—————————
Probbably my personal faviourte just cause of how ridiculous it is putting htis muche dynaminisim into a fucking pushbike slide. It’s hard to track down a storyboard artist here. There’s a couple of dudes listed as storyboard artist combined with other roles such as episode directors etc. We have Itamura Tomoyuki, Kawabata Takashi and Yase Yuki that I can find. I’ve never actually seen Nisemontogari so I don’t really have a lot of commentary to add on this just that it cracks me up.

—————————
2014 Bartkira
—————————
FULL CIRCLE! (kind of) MOTHER FUCKERS! The Bartkira project was a…. weird fan project that started back in 2013, where artists were recreating the Akira manga using characters from the Simpsons, it blew up and balooned in popularity, spawning the recreated trailer for Akira using Simpsons’ characters etc. Stephen Loveluck got on this shit early, creating this homage to the Simpsons couch gags using the by now iconic Akira bike slide and really just, like, graciously providing a perfect end point to this article wich I think really was his original intent.

This is a far from complete list, I only just barely touched on the fan art aspect of it which is expansive as fuck. So are there any great ones I missed? Post em below.