I’m tempted to just link to my article on France’s cinema from last year here and call it a day, because Haute Tension remains the only one I’ve seen (I’ll be getting to Ils later this month) and my thoughts on that aren’t going anywhere. Still I feel I owe it a deeper look than I gave last year. Despite France’s long, proud film history, like so many other nations, it took until the late 90’s and early 2000s for many horror films to really break through (exceptions being for Diabolique and Eyes Without a Face) and I hate to say it is because they take their cinema “serious” there but it’s the truth and something modern French directors there attest to.

Horror in general has struggled to achieve recognition with certain pretentious critics desperately trying to assign horror films to other genres (“it’s not really a horror film, it’s really a thoughtful examination of parenthood”) because they are afraid to lose their credibility and admit that horror can tackle serious subjects. The New French Extremity (like the later “torture porn” subgenre) stands out because like many “artistic” films (which we will certainly discuss with Salò) both in and out of horror is their transgressive and controversial content. It’s the reason that the subgenre covers not just horror films with explicit violence, but films of the era explicit with sex. Testing boundaries may not necessarily make your film good, but there always needs to be films at the edge figuring out just how far we are willing to go and if you want to tie that in with a political context to make some deep statement, go for it. I reserve the right to call you (and many art films in general) pretentious garbage and find them excruciating to sit through, but I’m happy some mad bastard is out there making them.

Once again, I apologize for not breaking the genre down better in favor of a rant but diving into a genre that is so mediocrely received at best and promising an uncomfortable viewing experience especially not when the first of those that I tried took a great film and absolutely choked it all away with its twist. All these films though are truly descendants of the great body horror and exploitation films of the 70’s and 80’s with their boundary pushing in content. I’ll also take this opportunity to hype the film Angst which is apparently responsible for much of Gaspar Noé’s career and was one of the best movies I saw last October. Like “torture porn” however, the movement has mostly evaporated away in this decade (I guess “New” can’t be new forever and eventually you are destined to find the boundaries) though filmmakers such as Leos Carax, Alexandre Aja, and Noé are still around making strange films.

Let’s deal with the two most obvious things first. If you can’t stand the sight of gore and people brutally suffering this film is not for you. It does not shy away from the blood, people being boiled alive, or scenes of hooks through feet. That last thing brings us to the second obvious fact that this is extremely reminiscent of SPOILERS The Texas Chain Saw Massacre complete with inbred cannibal family featuring multiple sons (including one who is hulking but dim), an infirm elder, the aforementioned meat hooks, very rural feel, and the final girl who gets a large amount of the attention late. There’s still plenty to separate the two without this just feeling like a retread and it just left me feeling that this was a better Texas Chain Saw Massacre remake than the official one. END OF SPOILERS Also, despite that film’s reputation, it was surprisingly discreet with its gore which made it all the more effective.

That’s not to say that this film isn’t effective, because it can be really tough to watch and I mean that in the best possible way. While it can feel at times like the film is just trying to show off all the brutal ways it can torture its cast, there is far more sense of a progression to it than say Hostel 2 or the later Saw films. The gore and special effects look good, occasionally uncomfortably so which is absolutely necessary for a film like this while the camerawork is generally good if too much into the “shaking the camera back and forth” to try to making things seem exciting.

The villainous neo-Nazis are clearly a part of a political message about the modern far right movement but it’s terribly handled and basically forgotten for most of the movie. It’s as if the filmmakers thought just including both groups were enough and that was it. I’m still not sure how riots against a far right government has any story parallels to neo-Nazi cannibals but maybe someone with a better knowledge of the French government or whatever drugs Xavier Gans has access to could help. Even the fact that our leads aren’t white seems skimmed over, the Neo-Nazi’s entire reaction being “well that’s awful and all but *shrugs* what are you going to do?” before just heading back to the cooking and enslaving.

The lead’s weird shaking and shuffle-like thing is incredibly hard to take serious, and just reeks of ACTING. It’s a petty thing to bring up and should be trivial, but every time she does it, it takes me out of the film instead of being transported into her very obvious pain. Far too many Bond villain scenes of the villains standing over their victim forever with a gun, just waiting for someone to stop them (which happens every bloody time). The climax also takes things a step a bit too far into ridiculous SPOILERS specifically the explosion END OF SPOILERS but it never really betrays the horror. As a gore filled film that left me on edge the film is pretty successful, but the story and missed chance at a political tale leave it as a fairly middle of the road horror film. 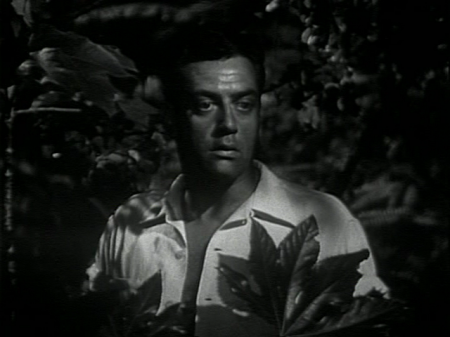 Features Lon Chaney Jr. slumming it and an early role from Raymond Burr (Perry Mason). I have no clue what Chaney is going for in his role. Is it yellowface? Brownface? He’s got a Japanese sounding name but refers to the South Americans as his people (and calls himself as a native corrupted by his knowledge at university *facepalm*) depicts howler monkeys and jaguars (again South America) but features the gorilla which indicates Africa (despite neither overlapping in region) yet speaks in a British accent. Of course the easy answer is the filmmakers are lazy idiots making a film called Bride of the Gorilla but if you are going to depict the natives as a superstitious lot at least try to be consistent in your stereotypes. The film tries to lampshade this by pretending it may be a sukara (jungle demon) but you’re not fooling anyone.

As far as bad movies go, this is a nice, quickly moving and easily mockable one. The fun to watch kind as opposed to the unwatchable crap that AIP would release. Our female lead is a boring blond woman who apparently attracts the attention of every man on first sight. The gorilla is given a brief glimpse (a hand here, a back there) which may be for the best, but instead all we get is Burr with a stupid look on his face talking about his love of the jungle which seems oddly sexual. The best the film can come up with for why he changed is he was poisoned but that doesn’t slow them down from shooting him despite the fact for lightly menacing a woman he told to stay away but followed him anyway. 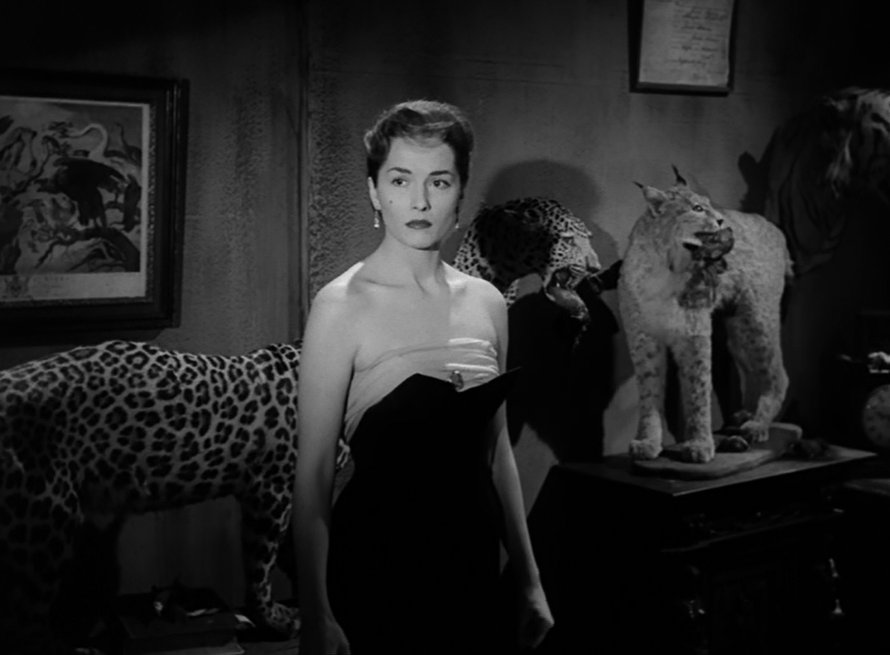 I was about to make a joke about how “of course it is an unofficial remake of Cat People because AIP would never have the kind of money or will to buy the rights to a story” until I noticed the film was only released in the US, not produced by AIP. It still very much fits into their model by releasing a second rate version of a classic film (granted a classic I never quite cared for) but shockingly there’s a lot to like here. I don’t know if I’d call it a good film but it’s well paced and has a good sense of atmosphere. Now if only the film had figured out everything else.

The story is pretty basic “everyone thinks she’s crazy” when a woman tries to say she keeps turning into a cat and like so many of those stories, they have to make things frequently contrived to show how she’s turning in one scene and normal seconds later. There’s a reason most of the best examples of these tend to be comedies such as “One Froggy Evening”. It’s frustrating as hell to watch people be such idiots when it’s not played for laughs at their expense. Our hero is a gigantic asshat who locks up a woman who he thinks is crazy but when he’s proven wrong later is able to walk free and not even explain why every piece of evidence points to him having murdered a woman. Heck the cop even offers to wash the car for him. The acting is straight out of a bad melodrama and the cat girl (of course now my search history contains multiple searches for “cat girl” telepathic link is just as silly as it always is in films. For the second straight movie, we never get a good glimpse of the transformation into animal form, the best part of these movies were-animal films, but it’s still a solid watch if you are looking for bad horror films.