I’ve mentioned before that horror movies don’t really scare me. They can unnerve me quite a bit (see Bone Tomahawk) or startle me (then again so can most other humans touching me), but not really scare. Therefore, most of my favorite horror titles tend to bring something else to the table such as tension, beautiful visuals, or comedy. Comedy and horror are natural friends. They are both generate strong and highly subjective emotions and for lack of a better word, they both try to be “fun”. The balance between the two is highly variable and despite the opinions of some, I don’t especially care if the film is mostly comedy, mostly horror, or split between the two, just make it good. There’s frequently the issue of trying to do both and achieving neither, but that’s hardly different from any film of either type.

Comedy-horror movies have existed back to the silent era (I’ll actually be taking a look at The Monster later this month) though in the beginning they trended towards corny comedy in a horror setting. Sometimes this worked well (The Abbott and Costello starring Hold That Ghost and Abbott and Costello Meet Frankenstein) but most of the time it was painful to watch (I’ll admit to have never seen perhaps the best regarded of them The Old Dark House). The 60’s and 70’s were when the genre started to find it’s footing with the great A Bucket of Blood, the rise of Vincent Price as a sort of transcending a film actor (and who starred in the first classic one, Theatre of Blood, and director Joe Dante (starting with Piranha). Of course one of the greatest movies of all time (any genre), Young Frankenstein, was also release in this span along with the gloriously weird Hausu.

The 80’s saw the genre explode for the first time with Re-Animator, Return of the Living Dead, and the perfect balance between the two that films still try to live up to, Evil Dead 2 leading the way. Even as horror as a genre was suffering a bit of an identity crisis, the early 90’s still gave us Gremlins 2: The New Batch, Dead Alive(Peter Jackson’s masterpiece), Army of Darkness, Addams Family Values, and Tremors. For better or worse, as with slashers Scream infected the genre in the late 90’s and early 00’s with self-referential humor but with the exception of The Happiness of the Katakuris and Bubba Ho-Tep (and Buffy the Vampire Slayer if you count TV), no film really exceeded mild amusement (fine I’ll admit Eight Legged Freaks was especially amusing is insubstantial).
It was the release of 2004’s Shaun of the Dead that really popularized the genre and has now made it into such an omnipresent force. While leaning more in the comedic side, it was probably the best mix of both genres since Evil Dead II but doing the Young Frankenstein thing of honoring the films that inspired it as a framework for some really funny stuff. The great comedy-horror films that have been released since have been too numerous to list but Slither, Piranha 3D, Zombieland, Tucker & Dale vs. Evil, Cabin in the Woods, ParaNorman, This is the End, and You’re Next rising to the top. You’ll notice that plenty of these films will be discussed before and later, since comedy-horror by its very broad nature can be mixed with any genre and as I said before, I love them so.

Part of this new burst of horror-comedy titles is a film starring Elijah Wood, Alison Pill (unsurprisingly the best part of the movie), Rainn Wilson, Jack McBrayer, Nasim Pedrad, Leigh Whanell (Saw, Insidious) and Jorge Garcia with cameos for Matt Jones (Breaking Bad), Mark Lawrence (Chuck), and Kate Flannery (The Office). A cast that clearly sells where on the spectrum it intends to fall (more comedic), but you can certainly do worst with a cast. The film is of the viral zombie variety (28 Days films, Pontypool). The comedy itself starts firmly in the awkward humor type and it made me want to burrow into my seat so hard well aside from Garcia’s role which is just one long, disconnected and stupid drug joke.

The gore is nice and surprisingly the highlight of a film that is trying really hard to be funny. I mentioned before that films have a hard time with the whole “violence against children” thing which would prove rather hard to get around here considering the villains are all kids. The film doesn’t shy away from showing the bloody damage even if it clearly is much more willing to show the violence against adults. Which is fair I guess, even as the film quickly establishes how obnoxious these little shits are. Yet the violence is meant to be mere set dressing to the comedy and the film quite consistently misses the mark. Aside for Pill who elevates an underwritten role, Whanell is surprisingly the only one eliciting even a chuckle. Each character gets maybe a single joke repeated ad nauseam regardless of if it was ever funny.

The film occasionally tries to give a poignant message about teaching, but every time it feels so out of place and tired. The story at least has the courtesy to start getting going quick but it never quite gets a handle on its narrative elements, lurching forward and stopping seemingly at random before essentially just ending the movie abruptly when it feels it has stalled for enough time. Considering the cast and premise, there was a lot of potential here, but the film doesn’t do anything countless zombie and comedy-horror films have done before and better. Aside from the early cringe humor, it’s not unpleasant to watch, it’s just not worth spending time with. 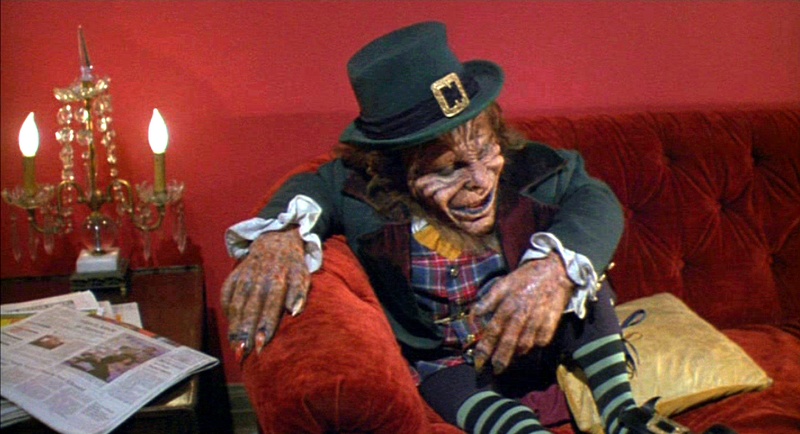 Leprechaun was probably the last major horror franchise that I go around to seeing an entry from and it may very well be the worst debut entry. A horror-comedy that forgot both parts. I can’t say I expected anything from this followup entry it’s always nice when a film completely lives up to your expectations. The film does have the fact that it comes from the director of the enjoyably stupid Idle Handsworking it’s favor along with the fact that it is far more Warwick Davis centered.

Thankfully the film is even worse and consequently a more pleasant viewing experience. Any time Warwick Davis is on screen the film almost threatens to be good, or it would if a decent writer gave his scenery chewing something to work with. It’s attempts at humor all still fail miserably with just about every bad short joke deployed. I guess I should congratulate the film on its relative restraint when it comes to Irish jokes, but its unironic little person jokes make me just want to slap them. The film barely tries at horror which is good because otherwise it would just make me sad at their attempts. I still wound up pitying the filmmakers for having been denied the ability to know what horror is. As a so bad it’s good film… well the film still fails miserably but it did get a few chuckles out of me at its lameness so that’s at least more than the original title.

We get cameos from Clint Howard, Tony Cox (Bad Santa, and Michael McDonald which are more sad than anything else. Not because they are wasting great comedic actors (because Howard and McDonald are certainly not that), just that they seem to be trotted out for their chance to steal a scene and instead get the worst jokes of the movie (or in the case of Howard such an inconsequential role). Yet despite all this crap and the fact that more pleasant in this case only actually translates to a less unbearable use of my time, I know full well I will watch the next movie later this month out of self-hatred.