Long before torture porn and found footage were “destroying” horror, we had slasher films “doing” the same. Unlike yesterday’s fairly ambiguous genre, slashers are far more straightforward. A villain goes around killing other people one by one. It’s like Die Hard where John McClane is the villain. In the early 80’s, this was the genre that defined horror in the popular eye after the release of 1978’s Halloween, one of the greatest horror films ever made. Since this was the 80’s, perhaps the dumbest decade of the 20th century, the people lost their shit over how bloody the films were and how they were bringing down western civilization. In fact, it’s one of the things I most lost respect for Roger Ebert over.

Halloween itself was following up on the legacy of the earliest slashers such as And Then There Were None, House of Wax, The Bad Seed, Psycho, Peeping Tom, and the giallo genre as a whole. Despite the fact that these are slasher films in all but name (and largely are not universally considered as such because of pretentious horror critics who are afraid of “tainting” classics by association with the genre), critics will usually concede the start to coincide with the release of the 70’s films The Texas Chain Saw Massacre, Black Christmas, and the one that all slashers sought to rip off Halloween.

The next decade saw the genre, well there were some highs and a lot of lows in quality. Sometimes we got films such as the almost universally enjoyable (aside from the rushed and lousy Part 2) Nightmare on Elm Street series, The Stepfather, the first two Child’s Play films, and the first two Halloween sequels (well narrative ones anyway), but most of the time we got crap like Friday the 13th and all the films that sought to ape its style (except Sleepaway Camp which went and did it better). The genre aside from Candyman mostly sputtered out in the 90’s but Wes Craven’s New Nightmare and his later Scream movies brought the genre out of its funk (first creatively, then commercially) with a post-modern and self-referential style. With the exception of Bride of Chucky and Halloween Water, the genre immediately sank back into the gutter though with the able mixing of quips, actual horror, and deconstruction of Scream replaced with bad humor and neutered horrors of films such as Urban Legend and Valentine.

The most noteworthy offender though is the follow up title to Scream writer and hack Kevin Williamson who was later responsible for Dawson’s Creek and The Following among other things, I Know What You Did Last Summer. The film sucked but it at least had the courtesy to have a decent backstory. Guy gets hit by a car and left for dead and seeks to kill those who did that. It’s practically a horror version of a Clint Eastwood movie (specifically Hang Em’ High), except we are supposed to be rooting for the people to hit him. The whole first film was wrapped up in a mystery of who is behind the killings and made for a nice solid base for Williamson and the cast to shit all over and then in an obvious sequel hook just not ending it (though to be fair, so did Halloween and A Nightmare on Elm Street.

The sequel dispels those few good bits by having the killer chase one of the two survivors to the Bahamas. Also the killer seems more intent on just murdering a bunch of unrelated people and literally leaves one of them lying intentionally unconscious instead of finishing the job. Heck, his second kill is of an innocent probably because I assume he just felt bad he hadn’t killed a black man yet. Speaking of, this version of the Bahamas is remarkably white complete with the creepy(?) asshole (played by a Jeffrey Combs!) running the hotel (You know filmmakers, not all hotel managers act like someone running a pay by hour hotel in New York City. Most want to leave their customers happy so they will return to give them more money and tell their friends to give them money) and Jack Black in dreadlocks saying “get jiggy with it”. I shouldn’t even have to review the film outside of mentioning that. I’m still not sure whether they intended for a contest to send them to some small secluded island in the Bahamas instead of just a major tourist place, whether the idiots making this film think that’s what the Bahamas actually is, or they just didn’t care.

So with no real motivation besides occasionally menacing Jennifer Love Hewitt with vaguely creepy notes and killing people because he can, what’s left? I know all slashers run into this problem once they kill off all the people they are seeking revenge on (or their kids), but it’s hardly a huge leap for child molester Freddy to move onto other kids or even Jason who drowned because people were too busy sexing it up to just go around killing others sexing it up. I guess the killer just got bored and since this was pre-Arrested Development could even go around doing Buster impressions and making new friends. When life gives you a hook hand, might as well just murder indiscriminately instead of the asshole teens who deserve it. SPOILER Except it’s not even just old hook hands doing it, it’s his son because fuck you, it worked for Scream and maybe Trey Callaway hopes that we’ll blame this shit on Williamson instead by pinning the crime on him. The movie also makes sure to throw in another stupid sequel hook because dammit they wanted another slasher franchise regardless of whether it makes sense or not. END OF SPOILER

We do get to have a lot of false jump scares, overly telegraphed jump scares, and chances for everyone to scream as loud as they can. I think JLH did this just to give me (yes me personally) a headache. They even threaten to give us a version of the awesome Final Destination 3 tanning bed kill, but I don’t think JLH even gets slightly tan from the incident. The kills and attempted kills don’t go for irony, logic, or anything. It’s more like the writers just went in and inserted a kill every once in a while, picking the means by throwing a dart at a board. There’s no style, no story, no originality, just pure derivative garbage. It doesn’t even have the courtesy to be as incompetently made as say The Rage: Carrie 2. It’s technically proficient and gets more of weary, annoyed sigh than hate. Well at least Bill Cobbs and Jeffrey Combs hopefully got paid well. 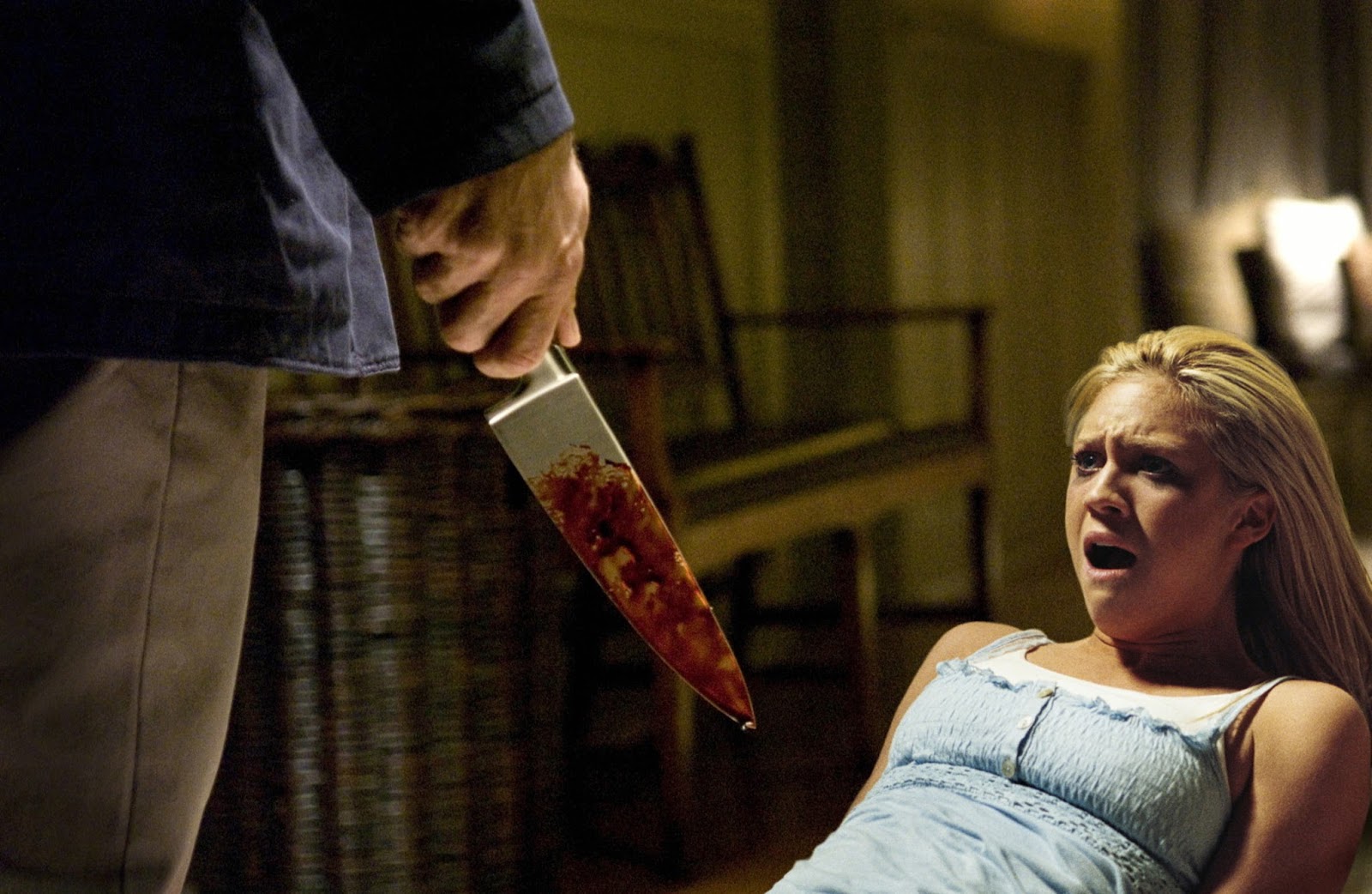 There have been good slashers since the late-90’s comeback such as Hatchet 2, Behind the Mask: The Rise of Leslie Vernon, Midnight Meat Train, and the comedy-horror Tucker & Dale vs. Evil, but the trend in the 00’s was the remake. Just about every single slasher seemed to get the redo and I’m perfectly fine if you want to try and do-over the misfire that was the original Jamie Leigh Curtis starring Prom Night. I feel a bit bad trashing these movies since I went into them knowing they’d be miserable pieces of excrement, but this hunting expedition feels well timed. Now that I’ve gone and blown my opinion of the film in the first paragraph, save yourself the hour and a half I wish I could have back.

First of all, the hell are Ming-Na Wen and Idris Elba (and Ziggy Sobotka as his cop partner!) doing in this? I know Elba is not above slumming it, but this is the kind of film that is supposed to fill its ranks with aging horror actors and character actors whose big role came a decade or two ago not an actor at the peak of their career actually trying to give a compelling performance. I will say it was not nearly as bad an experience as my own prom so that’s something. Then again this didn’t resemble my prom at all so who knows. There was no heading back and forth out of the prom like they do here (I mean how else are you supposed to get the requisite kills every set period of time?),
Also all the prom mythologizing is just as annoying as it ever is but I can hardly blame this movie for that. I can blame them for telling me how important it is so many times that I want to stab each and every one of these popular shits in the eye. I mean good on a movie for acknowledging that any person played by movie star at a prom would be a popular kid, but that still doesn’t make me care about them. Are we supposed to be upset that some idiot kid can’t purpose to his girlfriend at prom, because I sure don’t? If you are wondering why I’m harping on these things, it’s because this film is even more so of the technically proficient but just dull type. It’s as if each decade smooth more and more awful ideas out of bad movies but instead of making them good, they just make them less interestingly and memorably bad. Less hateable sure, but what fun is watching bad movies if you can’t laugh at them or let your contempt for everyone involve build and build. When I say it like that I think I have a problem.

The killer is just Blandy McBland generic white guy. He’s got the obsession part down, but lacks anything vaguely interesting about him. They could have switched the actor out every scene and I would never have noticed. The film does the jump scares with him but they barely seem to care aside from two lame attempts at dream sequences. It’s just going through the motions, doing the absolute basic required to be considered a horror movie with no sense of urgency. Kellan Lutz does what he can to liven things up by not even trying to pretend to be interested in appearing the movie, responding to every line with as if he’s already thinking about where he is eating that night. When Kellan Lutz feels the need to sleepwalk through your movie, that should be a sign you are doing something wrong.

Thanks to Netflix skipping over sending me Asylum (they sent me an extra movie which is always nice but it’s not like I can do anything with it for now), I had to redo the schedule slightly. This will likely not be the last time I am forced to.